Well, this is embarrassing. I finished off my last review (of The Impossible Astronaut/Day of the Moon two parter) by saying that my brain was broken and that all I wanted was a nice, simple straight-forward adventure to give my head a bit of a break, and that’s duly what this episode gives us. And … how unsatisfying does it feel? It’s as though, having feasted on full steak dinners for two weeks, we turn up this week to get a sub-sub-McDonalds burger at a motorway café. 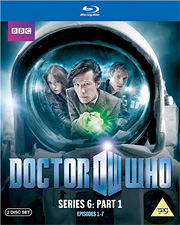 In truth this episode was always up against it as far as I was concerned because of the subject matter. I’m just not a big pirates fan: the only film/TV show featuring pirates that’s ever worked for me to any degree was the original Pirates of the Caribbean movie (and not even, you’ll notice, the sequels) to which this week’s episode will always be inevitably (very unfairly) compared. That film succeeded because it really went for it and was as outrageous as Johnny Depp’s inspired creation of Jack Sparrow; but where Pirates was full-blooded, The Curse of the Black Spot was half-fat and semi-skimmed by comparison.

The fight sequences never had a chance of being motion picture quality of course, but even so they were peculiarly flat and sluggishly shot here. The tone of the show as a whole was also very uneven, with some of the pirate crew doing full-on pirate cliché performances while others looked like they hadn’t got the memo – and then there was Hugh Bonneville giving a serious, intelligent performance of dignity and gravitas that belonged in a far more high-minded production altogether. And considering the production team went to the trouble of decamping to Cornwall to shoot on an actual tall ship, it’s amazing how studio-bound this episode felt, with the on-deck sequences against a featureless black background feeling as artificial as the 1983 Classic Who serial Enlightenment: there’s no sense of genuine place or atmosphere, of the claustrophobia of such a ship.

There were some definite pluses to the episode: I thought the performances of the three leads delightful, with Matt Smith never embracing the weirdness and the fun of the Doctor as much as he did here in scene after scene, and in particular his moments captain-to-captain with Bonneville were a genuine delight (although his sudden cry of “urgh, alien bogies!” was very ill-advised and made him sound like the Play School version of the character); Rory continues to steal the show, not so much with dialogue or plot in this episode but with little moments of physical comedy improvisation from Arthur Darvill such as his little wave at the pirates before the titles crash in; and Karen Gillan got some lovely moments, from her fight scene to her interplay with Rory over his falling for the siren. Oh, and said siren was tremendously effectively realised – well acted (perhaps surprisingly) by Lily Cole and by turns beautiful, creepy and scary, a lovely bit of CGI work that was exactly the sort of FX that had previously looked so poor and cheap in season five but here looks the proverbial million dollars (note to media critics of the BBC: not actually spent a million dollars. Oh, no, definitely not. Heaven forbid.)

Lots of good ideas (seeing into another world through the mirror – very Lewis Carroll) and moments, then, but the whole thing just didn’t really gel together and felt very uneven. Where the script and direction needed to be light and playful, instead we could hear the gears crunching as it tried to move from one set-up to another, particularly when young Toby was introduced to impose an unnecessary and clichéd pathos onto Captain Avery’s character and then later (more understandably) as the show tried to abruptly transition from pirates, folklore and horror to science fiction on another dimension’s ship rather too late in the day to make it work, feeling tacked-on instead.

Most of all – a surprisingly large number of plot lapses to be found here, of ideas not fully worked through and a script that hasn’t been finessed nearly enough. Was Steven Moffat too wrapped up writing his own scripts to run full due diligence here? To name a few: how did Toby stay undiscovered on board such a small ship for so long? Why is the Doctor so quick to call time and abandon ship on his beloved Tardis? Why on earth should breaking a mirror destroy the possibility of reflections – arguably it just makes a thousand more reflective pieces (c.f. the aforementioned Enlightenment?) What happened to the Boatswain who apparently just disappears from the Armoury? Why are all of the pirate crew left on the space ship when at least a few of them suffered from nothing more serious than a paper cut? Toby we can understand, and an ending that saw Avery choose to stay behind with just his son would have had more impact that a group shot of pirates gathering around with nothing else to do other than look at the stars and tie up a loose end. It can’t be that once transported, everyone – no matter how serious the original injury – is unable to leave or else the Doctor and Amy would be similarly dependent on the place forever more, let alone Rory.

Talking of which, I really can’t work out exactly what the logic was behind Rory’s condition. If the alien medical technology had cleared the water from his lungs and resuscitated his heart and respiration, why should be suddenly go back to a drowned state once removed? It’s pretty useless medical technology in that case, and the alien creators of it should be ashamed of themselves for their lack of foresight. No wonder they were all wiped out by the common cold (and – a space faring race wiped out by earthly bugs? Not exactly well prepared, were they!) It would be petty of me to say that I was disappointed that the siren/Lily Cole didn’t get to have a holographic moment with a line like “Please state the nature of your medical emergency,” but I could have sworn that the alien sick bay stole a couple of sound FX cues from the original Star Trek.

Oh, and please – can they stop killing Rory (or some series regular) seemingly every week? Have we really got to the point where we can’t believe that it’s a high-stakes adventure unless and until one of the main cast are apparently offed? I’ve lost count now of how many death scenes Rory in particular has had. If ever he is written out this way, no one in the country is going to realise/get it/care until several weeks later after all these cry wolf moments.

Sadly, all the plot threads from the opening two-parter were thoroughly parked, despite some heavy-handed attempts to reference them to make sure people didn’t forget and to establish a “through-story/season arc” feel to things. But rather than advancing the story in any way, all of these (Rory and Amy discussing the Doctor’s first episode death and how they couldn’t tell him; the Doctor re-running Amy’s pregnancy test and still not getting a clear answer; the re-appearance of Eyepatch Woman peering at Amy through a shutter) were literal restagings of what we saw in the first two episodes and consequently add nothing, except to either confuse or frustrate depending upon your personal mood.

All in all it felt like a filler episode, which in a season as short as this one is inexcusable. Or perhaps, in view of the pirate subject matter, we should just say that this episode was merely “treading water”; presumably having just walked the plank.

This entry was posted in Television and tagged arthur darvill, doctor who, karen gillan, matt smith.

This episode was lacking but moreso because it’s going to be used for later purposes.

I mean come on, Pirates that owe doctor a favour, a sick bay, and a pregnant woman? We are seeing these pirates again (and thats another reason they probably all stayed because I doubt Toby & Dad would be able to deliver a Semi-Time Lord Baby by themselves)

Yes, that’s a fair point – if it does turn out to be pivotal to the future stories then it would negate a fair number of my criticisms, I agree.

On the other hand, I reckon it’s a pure filler – so I guess we’ll have to wait and see how it turns out!