I reviewed the first episode of The Fall when it aired last month and have no intention of going over the same ground, but in light of some of the critical comments made about the final episode of the first series I thought I’d come back with a (relatively) shorter piece focusing just on the finale.

We’ve had a lot of brilliant crime shows of late that have stumbled at the very end – all three series of Forbrydelsen suffered from problematic conclusions, and even Broadchurch’s much ballyhooed last episode has similarly come under fire from those who expected more. With The Fall, viewers wanted either a resounding, satisfying climax to the current case in which the bad guy is caught, or else a major cliffhanger to put them on the edge of their seats for the next few months before the now-confirmed season 2.

The problem is that the producers themselves didn’t know if they were going to get a second season or not, so they had to make a final episode that could work equally both as climax/resolution and as cliffhanger/to-be-continued with just minor changes depending on what the network verdict turned out to be. (And when the very first episode set new records for a drama début on BBC2 the decision was not long in coming nor much in doubt.)

Viewers felt let down that the big climax was effectively a chat between DSI Stella Gibson (Gillian Anderson) and serial killer Paul Spector (Jamie Dornan) over the phone, and then Spector packing his family up in the car and driving off into the sunset, leaving Belfast for good. Was that it? It seems many thought it was too quiet and downbeat, not enough to be a real cliffhanger or satisfying conclusion to five hours of viewing.

Personally I disagree: I found the final episode compelling as Spector’s carefully constructed normal life fell apart, and at the same time he and Gibson came face-to-face. Their conversation over the phone was brilliantly written and totally gripping as Spector went from thinking he had the upper hand arrogantly asserting his superiority over the detective to being systematically cut down to size by the icy DSI one line at a time until he had nothing left and no where to hide. It was a brilliant deconstruction and if the police had materialised from off-frame to arrest him at that moment then it would have been as good a finish as I could have hoped for.

Instead he jumps in the family car to keep things going. My only problem with how the episode ends is: what can a second series possibly do from here? Spector is all-but uncovered, the police already have everything they need to put a name and a face to their quarry, and Spector’s sudden flight from the city is essentially an admission of guilt. So what can a new series do now? Will there be an extended manhunt for him across Ireland? Or perhaps something will happen so that the police, while knowing full well that they have their man, simply can’t prove it to a sufficient degree and so Gibson has to go head-to-head with Spector to try taunting him into a mistake, Columbo-style?

Overall it just seemed as though this was a six-part series that was suddenly forced to cram its last two hours into one. Too much happened too quickly here, and while it added to a dizzying sense of Spector’s world imploding in on him at a nightmarish rate, I can’t help but think it would have played better over two episodes instead. The fifth instalment should have focused on the aftermath of the disastrously botched attack that Spector was left fleeing from at the end of last week, but instead it was conflated into a separate and entirely coincidental police breakthrough with a piece of CCTV footage showing Spector and his young daughter at the same park one of his victims visited the day before she died. There didn’t really seem to be the significance to the video tape that the in-programme police and media gave to it, and the detective who interviewed Spector when he was forced to come forward to say it was him on the recording was so immediately harshly suspicious that it makes you wonder why any innocent witness would ever come forward to help the police ever again if that’s the sort of treatment they get. It was one of the rare moments that the series seemed uncomfortably rushed. 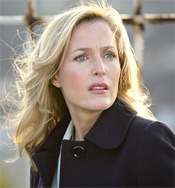 The only other thing that hasn’t really come off successfully in the first season of The Fall is the minor storyline of police corruption. Some have found it distracting, but as far as I’m concerned it’s been too thin and underdeveloped to come anywhere close to having sufficient impact to actually distract. It’s just felt odd, a parallel storyline with virtually no impact on the Spector serial killings and yet which at the same time has been tied into some of the show’s biggest shocks (the gunning down of a police officer at the end of episode 2; the sudden suicide of another at the start of episode 4 that saw Gibson at her most cool, calm and professional in response). I hope that writer-producer Allan Cubitt has a long-term plan for this that will start coming into fruition in season 2: if there is a sudden eruption of a police scandal, maybe the plan is for Gibson to take charge of that investigation, since as an outsider just brought in from the Metropolitan Police she would be the ideal non-interested person on hand to do so – at least until her former liaison with PSNI chief Jim Burns (John Lynch) comes to light.

So maybe season 2 will see the emphasis switch – corruption enquiry front and centre with some part-time baiting of Spector as the secondary thread perhaps? Maybe it will work, but it will be hard to recapture the sense of foreboding and dread that season 1 brought us so brilliantly.

And despite the criticism and relatively negative comments on the season 1 finale of The Fall, I still thought that overall the whole show – final episode included – was rather incredibly brilliant, along with everyone in it. Pay no attention to anyone who says otherwise!

Series 1 is released on DVD on Monday, June 17 2013. A second series has been commissioned. The Fall opened with an average audience of 3.5 million (peaking at 3.6) making it the most-watched drama series launch on the channel since HBO’s Rome in 2005; with the exception of one week against ITV ratings powerhouse Britain’s Got Talent, the ratings remained remarkably consistent throughout.