The all-too-brief series 3 of Sherlock is over, aired in just 11 days after a wait of nearly two years since the cliffhanger ending of the previous series. I’ve already commented on the first episode, “The Empty Hearse,” which I greatly enjoyed even though for many viewers it couldn’t live up to the impossible expectations that had built up in the interim. 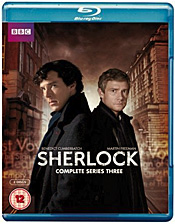 The online griping really started with the second of the three instalments, “The Sign of Three,” which took time out from crime solving (or so it seemed) to focus almost exclusively on the wedding of John Watson (Martin Freeman) and Mary Morstan (Amanda Abbington) with Sherlock Holmes (Benedict Cumberbatch) comedically out of his element after having best man duties imposed on him. The result was the nearest thing you’ll ever get to Sherlock Holmes: The Sitcom and I have to say that I loved it to bits and laughed throughout, the absolute highlight being the way that Sherlock’s ‘metatag wordcloud’ view of the world was completely compromised by too much beer on the stag night.

Yes, you could argue that the episode was rather missing a plot for much of its running time, but anyone who knows the work of co-creators Steven Moffat and Mark Gatiss (both of whom along with third collaborator Steve Thompson wrote the episode) know that anytime not much appears to be happening is the exact point at which the episode is smuggling past huge quantities of need-to-know material right before your eyes in a way that you won’t realise until much later. Sure enough the episode picked up to a rousing last half hour climax and further exposition was held back until the following week, so I feel sorry for those who gave up and stopped watching early and missed out on the pay-off. On the other hand, it does underline the point that Sherlock is not your typical mass audience fare and makes certain expectations on its viewers, some of which are really quite demanding.

The final instalment was “His Last Vow” which was widely greeted as a ‘return to form’ for the show by its critics since it was indeed back to something like the ‘case of the week’ detective story that the series began with back in 2010. In this outing, Holmes and Watson face up against master blackmailer (and nasty newspaper proprietor) Charles Augustus Magnussen played by Nordic Noir favourite Lars Mikkelsen (The Killing, Borgen 3) in scene-stealing form as the sleuth’s latest dead-eyed, cold-hearted nemesis. Very much a sort of ‘Sherlock gone bad’ in that his intellect and arrogance exceed even those of Holmes, in the end Sherlock is forced to take somewhat more direct and therefore unexpected action than usual in order to end Magnussen’s threat, which include a very real one to the new Mrs Watson.

There were gripes here about the way that Sherlock suddenly feigns a relationship and even gets engaged to someone we subsequently find is Magnussen’s PA, viewers finding this too much of a gross liberty to take with the character – to which I can only say, read the original Sir Arthur Conan Doyle short story on which this episode was (surprisingly closely) based, because Doyle has him do exactly the same thing back in 1904 (less explicitly for the times, of course.) Even the ending in which (final spoiler warning!) Sherlock triumphs only by shooting Magnussen dead in cold blood is arguably hinted as a possibility in Doyle’s original: while the author could never have got away with showing his own literary hero to be a killer, there are a few clues in the text that suggest this might well have been what he was implying. All in all, I’d have to give Steven Moffat top marks for the work he did in this adaptation (and regular readers will know all too well that I’m no automatic Moffat fanboi!)

As for which of the three stories is the best, I’d have to say that’s a redundant question: this series was clearly conceived, written and delivered as one whole, a triptych in which no part can really be appreciated without the others. It’s an ambitious and audacious approach and not one that will be appreciated by all sections of fandom, especially those that just want a nice, reliable tricksy weekly detective show with some clever touches. To them I say, watch CBS’s Elementary. That’s not meant as a backhanded compliment – actually I think the US show is one of the best crime procedurals around and is a series I happen to like a great deal. It’s just that I appreciate it in a very different way from Sherlock which has altogether different aims in mind than just turning out the same sort of thing every week. There’s no harm in that; indeed, the diversity it offers to viewers is to be celebrated.

However in Moffat and Gatiss’ eyes there’s no point in doing another episode or series of Sherlock if it’s just going to be the same as the one before. They’ll do more only if there are fresh and exciting things to do (such as focussing Holmes and Watson’s friendship more deeply in “The Empty Hearse” or playing for laughs in “The Sign of Three”) and that won’t always find favour with those who don’t like new directions. Some will find it self-indulgent and pretentious on the part of the show’s makers, and I’m sure there will be plenty of things that I myself won’t take to as well, and will grumble and complain about right here on this blog in future. But not right now, because at the moment I’m fully on board and think Sherlock just hit new heights and enjoyed its best series yet.

Now, let’s hope it’s not another two years until series 4 …

Postscript: After “His Last Vow” aired, BBC4 took up the baton with the hour-long “How to be Sherlock Holmes: The Many Faces of a Master Detective” new edition of Timewatch narrated by Peter Wyngarde and featuring contributions from Gatiss, Cumberbatch and Sir Christopher Lee. A look back over the many screen incarnations of the consulting detective, it was great to see some footage of the earliest actors (William Gillette, Eille Norwood, Arthur Wontner) and of course lovely to see a lengthy section on my personal favourite Holmes and Watson pairing, the incomparable Basil Rathbone and Nigel Bruce. Sadly the two 1960s TV series starring Doulas Wilmer and Peter Cushing were skimped on and two of my favourite Holmes movies (A Study in Terror starring John Neville and Murder by Decree with Christopher Plummer) were given short shrift while two atypical ‘dead end’ portrayals (The Seven-Per-Cent Solution with Nicol Williamson and Billy Wilder’s The Private Life of Sherlock Holmes starring Robert Stephens) seemed to get so much time that they squeezed even Jeremy Brett’s definitive 1980s portrayal into something of a rushed after thought. The truly criminal oversight came at the end when in summation the series explicitly spoke of there being two modern versions of Holmes – the BBC’s Sherlock and the Robert Downey Jr.’s movie franchise – and thereby intentionally seeks to airbrush the CBS show starring Jonny Lee Miller out of the picture. That suggests that the BBC is still fuming about the US network ‘stealing’ the idea of a modern 21st century of Holmes, but it felt a very obvious and petty slight and not the sort of thing becoming of a national broadcaster.

One thought on “Sherlock S3 (BBC One)”

Hadn’t got a clue what was going on most of the time, but enjoyed all three.