It’s been a long time since the SyFy Channel has its breakout mainstream hit Battlestar Galactica, and while it has done its best to repeat the success with the likes of Being Human USA and Haven along with last year’s ambitious Defiance, the truth is that the channel will probably actually be best remembered in 2013 for its notorious ‘so bad it’s good’ Z-list creature feature Sharknado. Perhaps as a need to redress the quality balance, SyFy has started the new year with a serious quality drama from executive producer Ronald D Moore, the man behind the BSG success. 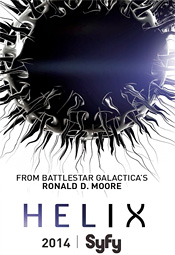 The basic story of the 13-part Helix series is that of a team dispatched to investigate a viral outbreak at a remote state-of-the-art scientific station in the Arctic. When they get there, they find something never before seen, a pathogen that turns its hosts into … Well, there’s no easy way of saying this: zombies, albeit the wilful and aggressive fast-moving zombies of the likes of 28 Days Later, World War Z and Zack Snyder’s 2004 Dawn of the Dead remake, not the slowly shuffling variety pioneered by George A Romero still to be found in The Walking Dead.

As well as seeking to tap into the current mania for all things zombie, Helix also cheerfully ransacks a whole slew of other science fiction movie classics. The early episodes and overall setting strongly evoke The Andromeda Strain while the growing sense of paranoia over not knowing who may or may not be infected but yet to show symptoms is very much in the same vein of John Carpenter’s The Thing, also sharing its ice-bound location. There’s a touch of Alien (and all the films it inspired) in the ‘haunted house updated with monsters for ghosts’ mise en scene, and ultimately I was reminded most strongly of all of the TV series The X-Files, which itself was never better than when it was cheerfully purloining from every SF and horror source it could find. In fact Helix rather resembles two episodes of that show in particular (“Ice” and “Firewalker”) as well as that programme’s series arc more generally with its underlying sense of a deadly military and business conspiracy behind the threat.

Despite a certain unexpected amount of quirkiness (the titles play jovial elevator muzak over unsettling graphics), the show doesn’t at this point display much sign of an original bone in its body. Even so, Helix nonetheless makes a pretty decent fist of its inherited ingredients: the claustrophobic environment of the science station means that the budget has been well spent on constructing interesting and credible sets, and the positively gruesome make-up and practical models are all top notch at this stage. The CGI sequences are rather average, but they’re also kept to a minimum once the team arrives in the Arctic and so the overall effect is of a much classier, high-quality and bigger budget production than it probably really is. 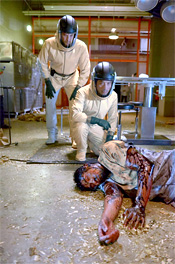 There are even some decent characters emerging in these early stages: Doreen Boyle’s veterinarian will be an audience favourite while Mark Ghanimé’s mysterious military engineer and Hiroyuki Sanada’s impassive station chief are all intriguing and were the ones that caught my eye the most from the two-part season premiere. Unfortunately I found the three main leads – The Killing’s Billy Campbell as Alan Farragut, Kyra Zagorsky as his ex-wife Julia Walker and Jordan Hayes as his admiring young trainee Sarah Jordan – not only rather bland and uninteresting but also threatening to turn into a distracting soapy love triangle that could prove troublingly toe-curling, especially when you throw in the notion that the Farragut’s marriage collapsed after Julia had an affair with Alan’s brother Peter (Neil Napier) who is – oh no! – also Patient Zero for the outbreak at the station.

Thankfully there was little time for such things to get too much in the way during the first two episodes, which if anything moves too fast for its own good in getting the quarantine situation out of hand even before the end of the second hour. It’s really surprising that it is in such a rush, as Helix at least escaped the scourge of the US TV pilot after SyFy picked it up and commissioned the whole 13-part run without forcing it to jump through those painfully unhelpful hoops. To be honest the rush makes you wonder how far into the run the show will get before it gets superheated and all credibility goes out of the window. It’s already getting eye-rollingly close, the number of times supposedly trained professionals wonder off on their own to darkened, isolated corners of the station where (cliché alert!) they inevitably get ambushed by one of the infected victims. That’s despite the conspicuous lack of success of the search parties combing the entire (large but not that large) facility to track those victims down.

Not that Helix has a huge amount of credibility to start with. Let’s be honest: this is really only a few notches above Sharknado at the end of the day and certainly not a rival to the likes of The X-Files or even Lost. What it has done is successfully identify a few effective themes and tropes currently popular in other genre offerings and spit out a reasonably entertaining mash-up that’s a lot better than you probably feared but a fair way short of what you ideally hoped for. You won’t hate yourself for watching, but you won’t really mind if you forget to tune in either.

Helix currently airs on Mondays at 9pm on Channel 5. There is no DVD or Blu-ray release date currently set for the UK.