Contains some spoilers for the aired episode.

Apologies, I’m a little tardy with my thoughts on this week’s episode of Doctor Who. And while I’d like to say this is down to having been really busy and not having had the time to put pen-to-paper/fingers-to-keyboard, the truth is more along the lines that I’ve been stuck for words and unsure exactly what to say about “Robot of Sherwood.” 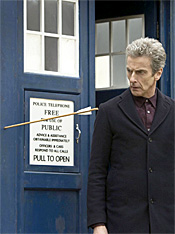 The thing is, these sort of out-of-character, over-the-top, thigh-slapping high camp ‘romps’ injected into runs of otherwise series dramas make my teeth itch. You may have noticed this from my reviews in the past, where I took against stories such as “The Curse of the Black Spot” and “Dinosaurs on a Spaceship” for example. And while you might think that my delight in 2012’s “The Crimson Horror” by Mark Gatiss (who also wrote this week’s story) is therefore an anachronism, the fact is that story was a deliciously black comedy of the darkest hue in which everything was still taken with deadly seriousness despite the laughs that ensued.

It’s not that I think Doctor Who shouldn’t be funny – of course it should. And nor do I object to the show’s unique diversity which enables it to go in quick succession from all-out science fiction action thriller to historical pastiche comedy to chilling ghost story (as apparently next week’s “Listen” will be). I don’t even mind when they do one just for the kids as “Dinosaurs” very much was – it’s a family show after all, and I don’t begrudge the fact that there will be some stories that just aren’t really aimed at me and that I’m not going to like so much. It’s just that this leaves me a little stuck when it comes to attempting to write a fair and balanced review of an episode that, at the end of the day, simply didn’t really click with me.

Even though I’ve been a huge fan of Tom Riley’s from A Bouquet of Barbed Wire to Munroe to Da Vinci’s Demons (he had even been one of my tips to consider as a future Doctor until he essentially got to do his version of the character in the latter series) the swashbuckling Errol Flynn-style overplaying of Robin Hood rather made me squirm. At the same time, Ben Miller’s portrayal as the Sheriff was rather under cooked perhaps to avoid comparisons with Alan Rickman’s gloriously ripe performance in Robin Hood: Prince of Thieves; Miller could easily have turned up the cheese by at least two more stops to match the rest of the episode’s elevated tone. Meanwhile the remainder of the guest cast was rather sidelined and given little to do – not even the Merrie Men make much impact after the initial introductions are over.

At the same time, there are sections of the episode that not only worked, but dazzled. The Doctor’s increasingly bad-tempered and posturing bickering with Robin was rather wonderful – especially the joyous dungeon scene – and overall made a lovely contrast with Peter Capaldi’s immediate predecessors as the Doctor who have invariably fawned over historical figures they’ve met, from Dickens to Shakespeare to Christie and Van Gogh. Of course, the fly in this ointment is that Robin is not a historical character but a fable, and until now the show has never before taken a fantasy figure and presented him as historical fact in the way it does here; even making a deep meta-textual point about how Robin and the Doctor are no different as inspirational ‘impossible heroes’ doesn’t make up for this, indeed it has the potential to undermine the Doctor’s and the series’ credibility especially when it makes the point with less-than-perfect-subtlety for a third time at the end of the episode, in what is in the first place just a strong echo of the fantasy storytelling themes of the fifth series (Matt Smith’s first) rather than the deep philosophising that it seems to mistake itself for.

In fact there was a strange ‘this story doesn’t fit’ to the whole of “Robot of Sherwood” and not just because this was the comedy outing for the season. It’s almost as though it was written very early before Capaldi’s incarnation had really been thought out; or maybe that it was a script meant for Smith that was hastily retrofitted for Capaldi with a surface level of cynical bite to the dialogue that would have been foreign to Smith’s portrayal. Otherwise though the hi-jinks with the spoon fight and the escape from the dungeon felt very much the sort of thing that Smith would have been up to if he had stayed in the role an extra season; it certainly didn’t line up alongside the more transformed episodes we’ve seen since with Capaldi in the role.

Similarly, the main threat of the Sheriff and and his robots seemed like someone had given Gatiss a very high level summary of the adversaries of “Deep Breath” but without any of the details, so that in both we get robots/clockwork men/cyborgs and time-travelling spaceships trying to repair themselves in order to get to The Promised Land (a link to the series arc involving the character of Missy). But are these robots/cyborgs really the same as those in the season opener, or completely different? The broad strokes point clearly to the former, yet the details argue against as there are no similarities in the design or behaviour. But two lots of marooned-in-time mechanical men in three episodes is too much for coincidence and Gatiss and showrunner Steven Moffat won’t have lapsed into lazy repeated tropes without a deeper purpose behind it all.

Some of this confusion might very well not be Gatiss’ (or Moffat’s) fault, since there was a significant edit made to the episode just days before it aired: the beheadings of US journalists in Iraq (together with a similar domestic incident in north London) meant that a sequence where the Sheriff lost his head had to be cut. It was the right decision (the comparison with real life events would have overwhelmed the episode otherwise) but it meant that a page of dialogue from the disembodied Sheriff explaining some of the backstory was also lost and I can’t help but feel that whatever was said, this was a highly significant and damaging loss to the satisfaction of the episode as a whole. Ahh well, real life takes precedence at times like this and that’s all there is to it.

The net result is that the plot proved something of a mess; in any case it had been largely sidelined in favour of further badinage between the Doctor, Clara, the Sheriff and Robin. But I will give the episode credit for some laugh out loud funny lines (“Errol Flynn! He had the most enormous … ego”; “Takes one to know one”) and a number of lovely grace note touches to the show’s past that included a touch of Venusian Akido, a mention of Richard the Lionheart and a miniscope, and recalling Sylvester McCoy’s fondness of working with spoons. We even got a brief on-screen glimpse of Patrick Troughton thanks to a publicity still from one of the second Doctor’s first leading roles on television as 1953’s Robin Hood.

In the end I didn’t hate “Robot of Sherwood”, but it did leave me irked and even a little bored with some passages of it. That’s despite Capaldi being quite delightful in his slightly lighter-hearted surroundings and Jenna Coleman also continuing her strong run in the series, once more being given more to do as Clara – although it’s interesting that her scene where she extracts information from the Sheriff was apparently Moffat’s specific suggestion after he was pleased with the way the similar (and far stronger) scene in “Deep Breath” panned out. Kudos too to Tom Riley, since while I didn’t like this brash, swaggering movie star version of Robin Hood there’s no denying that he delivered exactly the role he was asked for and his innate charisma shines through. (Watching him as ‘himself’ in the Doctor Who Extra behind the scenes featurette it’s interesting how he continues to appear the spitting image embodiment of the unfeasibly cheerful and heroic cliché in real life!)

The thing is, despite all my objections to not liking over-the-top, thigh-slapping romps, the actual truth is that often it’s just a case of my needing some time to digest the humorous style properly. In a few months I might have some very different feelings about this and may even come to a warm, fuzzy place where this becomes an affectionate long-term favourite that I’ll revisit many times with great pleasure. But it’s too early for me to be there yet (and it certainly never happened with either “Dinosaurs” or “Black Spot”) and so the jury remains out – for now at least.

Doctor Who continues on BBC One on Saturday evenings, with episodes repeated on Fridays on BBC Three and available on BBC iPlayer. A ten minutes ‘behind the scenes’ feature is also available on the iPlayer on on the red button. Series 8 will be released on DVD and Blu-ray on November 17 2014, and “Deep Breath” will be available as a standalone release on September 15 2014.