Christmas Day was a very Doctor Who affair this year. Not only was there the official Christmas special in which Peter Capaldi handed over the reins to Jodie Whittaker, I also spent the afternoon watching the latest Blu-ray release direct from 1979 – “a little later than planned” as the introduction wittily explains. 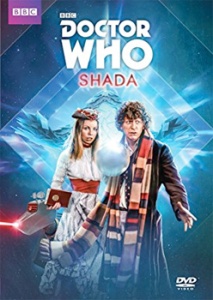 The six-part serial “Shada” has legendary status among Doctor Who fans. Intended as the final story to season 17 of the classic series, it’s the only one in the 54 years of the show’s history to fail to make it to air. Of course there have been all manner of story ideas that even made it as far as being commissioned as scripts, but none have actually started filming only to be abandoned midway through.

That’s what happened to “Shada”. Industrial action saw the plug pulled after initial location filming in Cambridge and the completion of the first of three recording blocks back at BBC Television Centre. All the extant footage was carefully stored away, but with series stars Tom Baker and Lalla Ward departing the show the following year there was no opportunity to go back and remount the production in order to complete the missing scenes. The existing material has been released in various forms over the years, including a VHS version with linking narration covering the missing scenes supplied by Baker. There was an animated version rewritten to star the Seventh Doctor (Paul McGann) and more recently a novelization of Douglas Adams’ scripts by Gareth Roberts.I’ve not seen or read any of those versions. The only footage I’d seen from “Shada” before were the scenes of the Doctor and his companion at the time Romana punting along the Cam, since these were used in 1983’s “The Five Doctors” in lieu of the Fourth Doctor when Baker opted not to take part in person. I simply haven’t shared the apparent fascination of most Doctor Who fans with this story, and have never even looked at the story synopsis to find out what the story was about.

But this year, buoyed by the success of the reconstruction of “The Power of the Daleks”, the BBC decided to finally complete “Shada” using the surviving footage from 1979 together with newly commissioned animation to fill the gaps, along with fresh dialogue recordings from the surviving original cast. Of particular note is the musical score, which of course is completely new: if it had been composed at the time, it would have been long-time contributor Dudley Simpson’s last hurrah on the show. In his stead, Mark Ayres riffs on the first five notes of one of Simpson’s greatest musical cues for the show before moving on to find his own style, gradually introducing electronic notes that would become a staple of the show’s soundtrack in the 1980s. It’s almost as though Ayres is signposting “Shada” as being the missing link that bridges two radically different eras of Doctor Who, both musically and production-wise.

It’s an ambitious project: where “The Power of the Daleks” was recreating something that had actually existed and where there were still photos and audio material to guide the work, large parts of “Shada” have to be tackled as if it’s an entirely new production with only the original script to work from. It’s done as well as it possibly could have been: short of time travelling back to 1979 to avert the strike in the first place, it’s hard to see how they could have done it any better than they have here.

The animation is in much the same style as “The Power of the Daleks”, but with greater nuance added to gestures and movements, and especially to facial expressions to give a better sense of performance. Inevitably, the transitions from live action to animation are somewhat distracting at first, making it clear how the production was organised and which studio sessions were lost. There’s more original footage than I had been expecting, and most of the first hour and a quarter is what was recorded in 1979 with only the odd scene here and there having to be recreated; after that the balance shifts and the final hour is mainly animation, save for one scene at the very end which is neither animation nor 70s footage.

Unlike new FX sequences which have been mounted using the same model technology available in 1979, there doesn’t appear to have been any attempt to blend the animation in with the surviving footage. The colours are searingly vibrant and the line art is razor sharp, especially in high definition. By contrast, the original material has that muted palette and soft focus that had already started to look tired and dated in the 70s even on its first transmission. The Blu-ray transfer does little to change its fundamental nature, but it’s nice and clean given that it’s nearly 40 years old.

The effort by everyone involved to do the very best job is commendable. As to whether it’s worth it, that rather depends on your feelings about the story itself. As I noted above, I knew nothing next to nothing about “Shada” and approached it as a brand new story: and rather than some lost Holy Grail, I ended up regarding it as a rather standard example of 1970s Doctor Who – with all the positive and negatives that assertion implies.

“Shada” is certainly better than “Creature from the Pit” and “The Horns of Nimon” which preceded it that season. It has undeniably more life and originality than “Destiny of the Daleks”. But it’s no match for “City of Death” which was by some way the best story of that year and an acknowledged classic of the show’s entire history. So I think I’d place “Shada” as somewhat on a par with “Nightmare of Eden”, allowing for the fact that “Nightmare” was itself badly compromised by the threat of imminent industrial action as well as having had its budget slashed to pay for “Shada”‘s extensive location filming – which ironically never made it to air.

In the story, Shada is the name of the Time Lord’s mythical prison planet. A megalomaniacal genius named Skagra (Christopher Neame) is searching for its location in order to free a notorious inmate that he needs for his plans to conquer the universe. The key lies in a book in the possession of Cambridge don Professor Chronotis (Denis Carey) who is actually an elderly Time Lord living in retirement on Earth. The book then falls into the hands of two postgraduate students, Chris Parsons (Daniel Hill) and Clare Keightley (Victoria Burgoyne), and the chase extends across time and space to Shada itself.

At this point, I have to confess a deep dark secret: with the exception of The Hitchhikers Guide To The Galaxy and its first sequel, I’ve never been a huge fan of Douglas Adams’ writing. He was certainly not a great choice as script editor for Doctor Who, not least because his inability to meet deadlines is legendary. Adams’ strength was his immense off-the-wall creativity – the nature of Chronotis’ college rooms in “Shada” are one such example – as well as his abundance of surreal and often juvenile humour. However, in general neither of these was right for Who – the lack of budget meant his ideas inevitably had to be scaled back, while the show was already trying to rein in the excesses of its increasingly bored star Tom Baker who was entertaining himself by sending the whole thing up when he could.

By contrast, Adams wasn’t so great at the minutiae of straightforward plotting or naturalistic characterisation. You can tell when he gets bored and starts phoning it in. And it happens in “Shada” at key moments where an awful lot of things simply don’t make sense. He also seems to have very little time for Romana who is largely sidelined here, instead introducing his own set of surrogate companions in Chris and Clare in her place. Even the computer in Skagra’s ship has greater personality, more screen time and a genuine character arc in comparison; but then, Adams always did like writing for robots.

Of course, things might very well have been different if production on “Shada” had continued as planned. There would have been changes to the script, both during filming and editing, that would have sharpened things up. But this new reconstruction doesn’t have the same freedom to manoeuvre and has to stick with what was written and filmed at the time, lest it be accused to taking liberties. That leaves a lot of the flaws exposed that would have been attended to during post-production, which means in turn that this ultimate reconstruction of “Shada” remains – inevitably, and unavoidably – a flawed effort.

This ties in with my only significant criticism of the reconstruction itself: that it is presented in a 140 minute feature length version, rather than in the six-part format that it was originally written. All Doctor Who stories of the 1970s were originally broadcast in 25-minute episodes, and not to offer this option on the new DVD/Blu-ray seems a curious omission given its strenuous efforts for contemporary fidelity. It’s probably because the episodes as scripted significantly over- or under-run – one clocks in at under 20 minutes, another runs to 34. The production team would have shifted scenes around and made cuts to ensure things fitted, but the reconstruction doesn’t have license to do that, and the differing lengths would look very strange indeed to modern viewers. But certainly I for one would have appreciated the option.

Overall, I’m glad to have finally watched “Shada” at long last. But my feelings about it remain the same as they were when I first heard about the BBC’s plans to complete this never-finished serial: I’d much rather they focussed on reanimating some of the stories that were made in the 1960s, which the BBC then callously wiped from the archives – stories such as “Marco Polo”, “The Daleks’ Master Plan,” “The Massacre of St Bartholomew’s Eve” or “The Abominable Snowmen.” To me at least, that would have made for a more noble and worthwhile effort.

As it is, “Shada” never existed and therefore cannot ever be successfully reconstructed – despite all the passion and talent that this latest (and surely definitive, and final) attempt brings to it.

Doctor Who: Shada is available on DVD and Blu-ray in the UK.