It seems like only last week I was suggesting that Doctor Who is best when it’s at its most scary. Oh, wait a minute, it was only last week. There you go, you see: you wait for ages for an effective, chilling episode to come along and then inevitably two turn up in quick succession, in what can’t help but look like a bit of an awkward hiccup in scheduling.

But in fact, despite sharing some basic horror elements, this week’s story is very different from last week’s “Can You Hear Me?”. That started with a ‘big monster on the rampage’ sequence, segued to a creepy guy lucking in the shadows in people’s bedrooms, went on to the very stuff of modern nightmares, only to veer off into an earnest and well-executed drama about mental health which unfortunately came at the cost of pretty much losing the plot in the process. In contrast, “The Haunting of Villa Diodati” starts with a classic haunted house tale, and despite adding a science fiction element to the heart of (almost) all the ghostly incidents and even very effectively connecting it up to the overall series arc, the script by Maxine Alderton manages to never lose focus or cohesion and as a result delivers an episode right up there with the classic entries in the history of the long-running series.

The story has its own message – about how “words matter” and can change lives – but it does so very nimbly and as part of building up the stakes for a no-win decision facing the Doctor, rather than as some major declarative statement as has been the case at other times in the Chris Chibnall era of the show. The episode also continues Chibnall’s interest in foregrounding real historic events and people as seen previously in “Rosa” and “Nikola Tesla’s Night of Terror”, but again a light touch means that this time it feels much like a natural scenario and interesting line-up of guest characters appropriate for the drama on hand rather than another public service historical infodump.

This week we are quickly introduced to the lives and work of Lord Byron, Percy Bysshe Shelley, Dr John William Polidori and especially Mary Wollstonecraft Godwin – soon to be better known as Mary Shelley, author of the original Frankenstein novel. The Doctor (Jodie Whittaker) and her friends want to see the moment when artistic lightning struck to create one of the seminal works of literature, and so they turn up soaking wet on the doorstep of Villa Diodati on the shores of Lake Geneva to spend some time with Byron’s gang on that fateful night in 1816. However when they arrive it seems that none of the occupants of the villa are actually remotely interested in writing, and the Doctor herself is soon troubled by a sense of evil within the house. Something isn’t right here.

The episode does a good job slowly building up the pace, so that in the first act we get to know the guest cast: Jacob Collins-Levy treads a fine line in making Bryon something of a sleaze while still managing to believably retain some of the charm that made him such a star of the age when he was memorably described as “mad, bad, and dangerous to know,” while his lover Claire (Nadia Parkes) gets a strong “MeToo” moment when the scales fall from her eyes and she sees the cad for what he really is. Meanwhile Years and Year’s Maxim Baldry presents a suitably dark and moody presence as the insomniac Polidori (who wrote what’s generally accepted as being the first modern vampire story on the same night as Frankenstein was created, and it’s a shame this is never really mentioned) and Stefan Bednarczyk steals scenes as the alarmingly stealthy valet. But of course the main supporting character this week is Lili Miller’s Mary, and she effectively presents the independent minded spirit of a woman who will stand up to unimaginable terrors to protect those she loves. Strangely missing from the set-up is Shelley, and it’s deep into the episode before Lewis Rainer shows up in the role (attired in an unfortunately obvious wig). Unfortunately we don’t really get to know much about Shelley as we’re not exactly meeting him at his best here. However at one point, the Doctor quips “Save the poet, save the universe” which rather implies she’s been whiling away her spare time in the Tardis binge-watching boxsets of Heroes!

The guest artists play the first half of the episode pretty straight, as if this really is a drama series adapted from contemporary works of Jane Eyre or Charles Dickens. Around this we have director Emma Sullivan and director of photography Ed Moore pulling out all the stops with ghostly tropes of hidden figures briefly revealed by flashes of lightning, disembodied hands scuttling across the floor, objects flying across the room of their own accord, people walking through walls, and then the house constantly reconfiguring and folding in on itself to make escape impossible. Given that Sullivan and Moore were behind last week’s superlative visuals, it’s not surprising that they are just as successful again here while not simply repeating the slippery dream/nightmare unusual stylings of “Can You Hear Me?”. Composer Segun Akinola is also to be credited for adding a really eerie audio layer to the proceedings.

Oddly, the regular cast tends to to the comedic element in the first half of the episode, meaning that while the period characters are straight out of The Woman in Black, the Doctor and her group more closely resemble the gang out of Scooby-Doo!. This is actually quite a clever idea, successfully bringing to life the clash of two very different worlds and cultures. However it does mean that the regulars are acting slightly out of character from their established norms: Ryan (Tosin Cole) is strangely chippy, which accidentally provokes Polidori into challenging him to a duel, and then becomes childishly scared once the ghosts get to work almost as if channeling the spirit of Shaggy Rogers. Similarly, Graham (Bradley Walsh) forgoes his usual dry quips and witticisms for much broader sitcom humour, and at times appears possessed by the spirit of Del Boy as he unleashes his inner East End barrow boy persona. Only Yaz (Mandip Gill) seems to be sticking with her established character traits, and as a result the way that it falls to her to be the one to take action and show initiative – even in defiance of the Doctor’s orders – comes more sharply into proper focus than usual when it’s all too easy to miss, which has led to complaints that Yaz never gets enough character development.

Even the Doctor is not acting according to her previously established S11/12 norms. It’s almost as though Maxine Alderton is actually writing for one of Whittaker’s predecessors – Matt Smith perhaps, or David Tennant – or for a more generic/classic version of the Doctor. And the thing is, it really works for Whittaker. She feels like the Doctor we have known for years, confident and finally asserting her true place in the programme rather than always trying to play nice with the kids. Whittaker herself certainly runs with the ball she’s given and plays it for all she’s worth, and for me it’s the best outing so far for the Thirteenth Doctor as she works out what’s going on and then realises that whatever choice she makes to resolve the outcome is likely to be catastrophic. Moreover it’s her choice and hers alone: in the past she’s been reluctant to assume the mantle of leader, but here she absolutely grabs it with both hands, silencing her team by snapping “Sometimes this team structure isn’t flat. It’s mountainous, with me at the summit.” Now there is the Doctor we’ve come to know and understand and even to love. I was rather expecting this to result in a schism within the team and perhaps lead directly to Ryan, Graham and Yaz departing at the end of the season, but in fact they take it rather well. All three are still willing to line up alongside the Doctor at the end of the episode as battle plans are drawn to head off and attempt to undo the damage that will now surely be wrought. Perhaps they’re simply aware that the Doctor’s outburst is not hubris or arrogance, but a simple statement of fact that they’ve always really known deep down must lie underneath the touchy-feely surface. 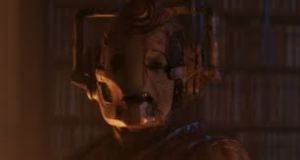 This change in dynamic comes in the second half of the episode, when the supernatural gives way to the science fiction. We always knew that the Cybermen would return at some point this season, even before Captain Jack popped up with his cryptic warning about the Lone Cyberman a few weeks ago. There’s something inevitable that this foretold figure should show up in a story about the writing of Frankenstein as there are obvious parallels between the two artificially reanimated constructs. The Cyberman can be a realistic inspiration for Mary Shelley’s ‘this modern Prometheus’, while still different enough not to take accidental credit away from her as the author of the novel. And in any case this Cyberman is not like any we’ve met before: the body horror that has always been at the core of their premise is brought very effectively to the surface by the ‘unfinished’ nature of Ashad (played by Patrick O’Kane) who is in dogged pursuit of a crucial piece of technology called the Cyberium that has been sent back from the far future.

By whom? Ahh! That’s one of the things I suspect we will learn in the upcoming two-part season finale. In the meantime, the very clever concept of this week’s MacGuffin explains away pretty much all the supernatural events seen in the episode – although not entirely neatly, and there are some big loose ends left intentionally hanging which the final scenes actually draw clear attention to. Even so, it’s an episode that takes no prisoners in its complexity and obfuscation. It does its utmost to scramble the brains of the viewers as it’s playing out, so much so that it almost demands an immediate second viewing to get to grips with. In that respect it feels like a direct descendent of the 1989 story “Ghost Light” – one of the last classic stories made before the show was mothballed by the BBC – in that it’s positively designed to reward repeated viewings to fully understand it. That was a new idea in 1989 when video recordings were still quite novel, home media releases expensive, and catch-up streaming services non-existent. No wonder everyone was left perplexed by “Ghost Light”; and even with today’s advantages, “The Haunting of Villa Diodati” similarly takes quite a bit of work to truly get to grips with.

But it’s worth the effort. This episode feels like a successful bridge between the classic era, the rebooted period of Russell T Davis and Steven Moffat, and the current reimagined stylings of Chibnall. As a result, this is a strong 50 minutes of drama on every level and needs no excuses, explanations or allowances in order to stand side-by-side with the best of Doctor Who stories spanning the last six decades.

Doctor Who S12 continues on BBC One on Sunday evenings at around 7.10pm, and is available thereafter on BBC iPlayer for 11 months. DVD and Blu-ray versions will be released on April 20 2020.

You spotted the Heroes reference too!

Oh yes! And I knew you would be straight on that one, too 🙂