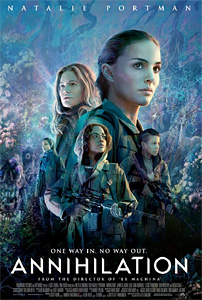 I’m a huge fan of writer-director Alex Garland, whose Ex Machina was one of my favourite films of 2014. So I was a bit irked to find that I’d missed his follow-up offering Annihilation which for the life of me I couldn’t remember doing the rounds at the local cinema.

I was somewhat mollified to find out that in fact the film apparently bypassed a theatrical release in the UK and was offered here instead exclusively via Netflix. Since I’m not a subscriber to that particular streaming service, I would have had to wait for its release on old fashioned DVD and Blu-ray home media in any case, which it turned out happened to be earlier this month.

The film, based on a novel by Jeff VanderMeer, features Natalie Portman as Lena, a former US Army soldier who is now a leading cellular-biology professor. She’s in mourning for her husband Kane (Oscar Isaac) who left on a top secret covert military mission a year ago and hasn’t been heard of again since. Except now he turns up, a shell of the man she remembers and also seriously ill. Lena sets out to find out what happened to him in the hope that she can find a cure, and her search takes her into a strangely warped area of Florida land in which the natural laws of reality no longer apply after a meteorite impacted the shoreline three years previously. END_OF_DOCUMENT_TOKEN_TO_BE_REPLACED