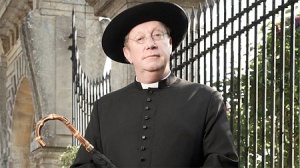 Christmas and New Year is all over: the presents have been put away, the tree is outside waiting to be recycled, and the decorations are back in the attic awaiting their annual recall in December. That can only mean one thing: it’s time for a new ten-part series of Father Brown on the BBC daytime schedules! 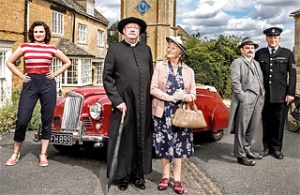 It’s that time of year again! The end of the Christmas and New Year holiday season means that Father Brown is back in business once more, with a new series in the daytime schedules on BBC One.

Last year’s run proved quite contentious, as a quick look back at the comments on our series five review will confirm. Many fans were deeply disappointed by the departure of two of the series regulars, Lady Felicia (Nancy Carroll) and Sid Carter (Alex Price) and found it hard to warm to newcomer Bunty (Emer Kenny). END_OF_DOCUMENT_TOKEN_TO_BE_REPLACED 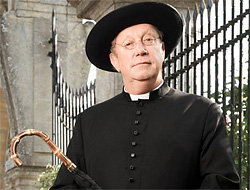 From humble beginnings tucked away in the daytime schedules back in 2013, it seems that Father Brown has slowly become a genuine break out hit for the BBC, boosted by digital channel reruns in prime time on UKTV and healthy overseas sales to the United States and South Africa. It’s now returned for its fifth season, with 15 episodes including a prestigious Christmas special that was screened on the day before Christmas Eve and the rest following on a week later beginning on the public holiday after New Year.

Things are much the same in Kembleford where Father Brown (Mark Williams) serves as the local Roman Catholic priest aided by parish secretary and busybody Bridgette McCarthy (Sorcha Cusack). The curate is still getting caught up in various local crimes that bring him into contact (and conflict) with the insufferable local senior police Inspector Mallory (Jack Deam). This time, Mallory’s longtime sidekick Sergeant Goodfellow (John Burton) gets promoted to the regular cast, but missing from action is loveable black market ‘spiv’ Sid Carter – we don’t find out the fictional reason for his absence until well into the new series (see “The Sins of Others”), but actor Alex Price has been cast as Draco Malfoy in the West End production of Harry Potter and the Cursed Child. Sid was chauffeur to local socialite Lady Felicia (Nancy Carroll) and she too only appears in the first two episodes of this latest run before departing to join her husband who has been newly promoted to a top colonial government post in Rhodesia. Fortunately her wayward niece Bunty (Emer Kenny) arrives just in time to effectively take over both Lady Felicia’s and Sid’s plot functions in their respective absences. END_OF_DOCUMENT_TOKEN_TO_BE_REPLACED