Watching the detectives: Line of Duty; Follow the Money; The Team; Broadchurch; Vera

Without question we’re living in the middle of a crime spree. Television crime, that is. While the streets have arguably never been safer in real life, the small screen is delivering a never-ending stream of criminal activity right into our living rooms – and it seems we just can’t get enough of it.

Here’s a look at five detective shows that are currently back on the evening schedules. Spoiler alert: they’re all really worth watching, providing that you can stomach the glut of nefarious deeds on display! END_OF_DOCUMENT_TOKEN_TO_BE_REPLACED

This week saw the return of Jed Mercurio’s Line of Duty, the gripping drama featuring the work of police anti-corruption officers. 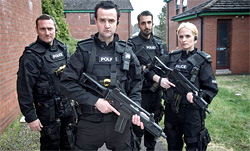 If I’m honest, I rated the first run as merely ‘okay’ as it felt to me to be a little too obsessed with overtly mocking the politically correct health and safety regulations that police officers in general have to work under. The point of the story in that first season is that one can either follow the rules but achieve little of note, or be a successful law enforcer with the best arrest and conviction record in the Force in which case one’s career will be wrecked for the perceived cutting of corners. Most searingly of all, the lesson was that no one could do both at the same time but had to choose which side of the fence they came down on.

After this somewhat over-worthy first run (which featured Lennie James as the stand-out turn playing the detective chief inspector under suspicion), the second series spectacularly exploded into brilliance with the tale of the unit’s investigation of DI Lindsay Denton (Keeley Hawes) after a convey transporting a protected witness was ambushed and Denton left as the only survivor. Was she complicit in the crime or framed? This uncertainty drove six episodes of truly stunning drama in which any health and safety swipes were introduced as natural background details rather than as the central part of the series’ raison d’etre.

After that brilliant series it’s hardly surprising that it’s taken Mercurio two years to come up with a third season. I had fears that the follow-up was never going to equal the superb second series, but if anything the first episode of series 3 could actually prove to be Live of Duty’s finest hour. END_OF_DOCUMENT_TOKEN_TO_BE_REPLACED

I hadn’t realised until I saw the publicity for series 2 that the original run of Line of Duty that aired last July had been the most watched original new drama on BBC2 for ten years: I suspect this achievement was subsequently eclipsed by the even bigger success of The Fall, but that merely serves to put it into even more impressive company as far as I’m concerned.

It’s a quick return for writer/creator Jed Mercurio’s police drama, but it immediately seems a very different beast. The first season was essentially a head-to-head confrontation between Tony Gates – a wildly successful, popular and charismatic Detective Chief Inspector played by Lennie James – and AC-12 anti-corruption officer DS Steve Arnott who was out to prove Gates complicit in ilegal activity and bring him down with the help of DC Kate Fleming. The structure of the original six-parter was evenly split between the characters of Gates and Arnott, with the audience invited to make up their own minds as to which – if either – was on the side of the angels. Gates, after all, brought down the bad guys while Arnott was using the absurdly Kafka-esque police procedures and health and safety regulations to entangle him over seemingly petty transgressions.

While the character of Gates does not return for season 2 for reasons obvious to anyone who saw the first series, Arnott (Martin Compston) and Fleming (Vicky McClure) are back along with their boss Superintendent Ted Hastings (Adrian Dunbar) and new recruit DC Georgia Trotman (Jessica Raine from Call the Midwife, An Adventure in Space and Time and Doctor Who episode “Hide”) and this time the target of their investigation is DI Lindsay Denton played by Keeley Hawes (Ashes to Ashes, Spooks). Unlike the first season, in this story Denton is no obvious hero and indeed is a complete enigma to us: this time we are firmly in Arnott and company’s shoes in trying to figure out just what is going on and who exactly is responsible. That makes this Line of Duty in many ways a more traditional and conventional type of crime thriller, but at least that means it has also dropped its slightly tiresome soapbox preaching about the unfair burdens of paperwork and overbearing scrutiny that the police toil under. Anything that it might have lost is more than made up by the shock-upon-shock developments of season 2, which instantly grip us by the throat and refuse to let go. END_OF_DOCUMENT_TOKEN_TO_BE_REPLACED

The BBC has chosen July to air two new drama shows that feel like they’re reasonably direct offspring from last year’s The Shadow Line, even though they themselves are quite different from one another. Normally too such dark shows would feel out of place in the middle of summer, but nature had taken care of that and left us with a distinctly cold, dark and wet noir-ish feel to the weather that makes these two shows feel perfectly scheduled after all.

Blackout – the story of an alcoholic, corrupt councillor – is set in some unidentified big city, probably but not necessarily northern, where it rains even more than it does in a typical David Fincher movie, making it an ideal reflection of the 2012 British summer. Of the two shows on offer, Blackout is the one to inherit The Shadow Line’s style genes, with every frame beautifully designed and shot and the whole feel like a shining modern film noir complete with blonde femme fatale and a detectives’ office straight out of a 1940s LA-set crime flick.

The characters are similarly larger than life and overblown, sometimes too much so despite a top notch cast led by Christopher Eccleston and including Dervla Kirwan, Ewen Bremmer, a cameo from David Hayman and a strange role for man of the moment Andrew Scott (recently Moriarty in BBC’s Sherlock.) As the noir genre requires, the characters are all deeply flawed but they also aren’t particularly subtle – and neither is the plot. It also doesn’t go in much for realism along the way, with Eccleston’s character apparently able to recover from a shooting, decide to run for major, get on the ballot, run a campaign, win and set up an administration in less time than it takes another character to organise a funeral and bury their father.

Realism is very much the watch word for Line of Duty, however. Written by Jed Mercurio (who created the scathing Cardiac Arrest back when he himself worked in the NHS) the main driving force behind this drama is to show the disastrous bureaucratic shackles that the police have to hack through to do their job. To follow one set of rules invariably means running foul of another set; to do what a superior officer tells you to do one day will earn you a rebuke the next. Finding a way to play the system with optimal effect gives rise to instant suspicion and an investigation. The last thing anyone has the time, inclination or freedom to do in such circumstances is worry about fighting crime.

The whole thing is shot in a very ordinary, realistic fashion (although there are a few nice directorial flourishes here and there) and the performances are very reigned in, portrayed by small grimaces and ticks in extreme close-ups. Lennie James is superb as Gates, the senior officer under investigation; and Martin Compston equally amazing and every bit a match for James as Arnott, the young anti-corruption officer hunting Gates down. Both characters seem quite decent and honourable men in their own ways: Gates cares for his family and about doing his job well and catching the crooks; and Arnott is principled and unbending in standing by the truth only to find himself hated for it. But each man is trapped by his past missteps, and also now by the mutually destructive vendetta that breaks out between them as a misunderstanding and the action of others.

Of the two shows, it’s probably apparent from the preceding paragraphs that I much prefer Line of Duty. When it sets aside its unsubtle agenda forever referring to filling out risk assessment paperwork during a high speed car pursuit and by health and safety and adherence to targets, it’s also the show that delivers The Shadow Line’s inheritance of being a gripping and highly unpredictable conspiracy thriller about real, believable characters that you genuinely get involved in. With the latest turn of the storyline there’s a risk that the final two episodes will go over the top, but I have high hopes that it will be able to steer on the right side of histrionics to the end.

The more style-over-substance Blackout doesn’t match up to this, but it’s nonetheless a more than worthwhile watch that is very entertaining and absorbing in its own way. It’s rather a shame it comes along at the same time as Line of Duty and so soon after The Shadow Line making comparisons inevitable, because Blackout comes off second best in that company while actually being a very welcome piece of accomplished original drama in its own right.