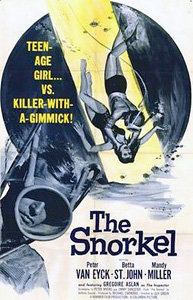 Hammer is best known for its decades of hugely successful horror output including the genuine classics Dracula and Curse of Frankenstein, but it wasn’t always like that. The studio had been set up in 1934 and produced a long line of largely unremarkable British movies, before developing a penchant for making film versions of hit television shows.

One such was Nigel Kneale’s BBC serial The Quatermass Experiment which proved Hammer’s stepping stone into the horror genre. But in 1958 this direction was far from set in stone, and the company was still producing films in many different genres including crime and psychological thrillers.

One of these was The Snorkel, and the ludicrous title is probably the reason why you will not have heard of it before – I certainly hadn’t. It completely fails to convey the fact that this is a gripping and actually rather dark affair which if you approach in the right spirit and stick with it to the end proves remarkably tense and chilling. END_OF_DOCUMENT_TOKEN_TO_BE_REPLACED

This entry was posted in Film and tagged Hammer, Jimmy Sangster, Many Miller, Peter van Eyck, The Snorkel.