Contains spoilers for the episode

Regular readers might recall that I was a bit grumpy last week in my review of “The Witchfinders”. It simply didn’t work for me, although I know the vast majority of viewers appeared to genuinely love it beyond measure. However for me, it was comprised of individually strong elements that lacked an overall coherent vision. The different parts rubbed against each other awkwardly and kept throwing me out of the story so that I wasn’t able to enjoy it at all, and instead ended up frustrated and less than happy. Or to put it another way, you could say that the individual parts were much greater than the whole, at least as far as I was concerned.

This week’s episode “It Takes You Away” is almost the mirror image (pun intended) of its precursor. Like last week, it is also comprised of several distinct parts; and on this occasion the quality of each component was less consistent than the previous instalment, ranging from the brilliant to the near-risible. But what writer Ed Hime and director Jamie Childs are able to manage this week is to wrangle these different elements into one unified end result that was superior to the sum of its parts. The key was a consistent stylistic vision and tone to the overall endeavour, provided by an adherence to overarching universal themes of love, loss and mythic folklore. END_OF_DOCUMENT_TOKEN_TO_BE_REPLACED 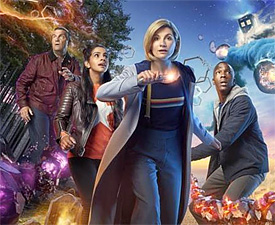 Things have been quiet of late at Taking The Short View Towers, but it was inevitable that the return of Doctor Who to our screens would be a wake-up call rallying us back into service. And so off we go into the autumn with a new season of Time Lord related reviews.

It’s certainly good to see the show back – about time, you could say – but you’ll quickly find that nothing is exactly like it was before. If the prospect of a new actor playing the title role isn’t enough, then hold on to your floppy hat and long scarf because this is where everything changes. END_OF_DOCUMENT_TOKEN_TO_BE_REPLACED